George Alfred Johnson was born in Fleetwood, Pennsylvania on September 26, 1922, the oldest of seven children.

George's father, Alfred, was also a war hero. Alfred was born in Russia and emigrated to England, where he trained at a military academy and served in the British military intelligence, speaking six languages. During WW I, Alfred was severely wounded at Belleau Wood, just before the US Marines landed and helped to win the battle. Alfred was one of 19 survivors of an attachment of 117 troops who were mowed down my German machine gun fire. He was captured and remained a prisoner of war until the armistice. He carried a large scar across his forehead from a bullet wound.

George's family later moved to Coatesville where he attended Scott High School. He left in his senior year (1942) to enlist in the Marine Corps. He completed basic training at Parris Island, SC, and advanced infantry training at Quantico. George was attached to the 1st Marine Raider Battalion as a Private First Class.

George was shipped overseas in April, 1942. He participated in the invasion of Tulagi, This invasion was named “Operation Watchtower”. It was the first amphibious landings conducted by our Nation during the war, and the first since 1898. 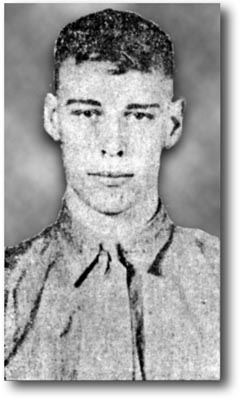 During the second day of the battle - August 10, 1942 - George was killed by the Japanese. He was awarded the Purple Heart, and the Silver Star for his gallantry. The Silver Star was originally designated only for Army personal, but was authorized for the Naval Services by Congress on August 7, 1942 as the service’s 4th highest medal.  According to Government records “During mop-up operations…his squad came under rifle fire from a sniper’s nest in a nearby cave. Private Johnson rushed to the mouth of the cave and continued to throw in grenades until he was killed, allowing his squad to advance. For his indomitable fighting spirit and outstanding bravery, Private Johnson was posthumously awarded the Silver Star."
George was buried on Guadalcanal, and is memorialized on the Tablets of the Missing at the Manila American cemetery in the Philippines. He was the first reported to die in service to his Country during WWII from Coatesville, although John Horshock and Leff Yale died the day before a few miles distant.

The Navy honored George Johnson by naming a new ship after him. The USS George A. Johnson DE-583, was launched at Bethlehem Shipyard in Hingham, Massachusetts on January 12, 1944. The ship was constructed largely with steel plates manufactured at Lukens Steel in Coatesville. George’s mother christened the vessel.  At the commissioning ceremony on April 15th, Mr. and Mrs. Johnson presented the Captain with a 9x12 drawing of their son, created by Mrs. Franklin Beltrando of Coatesville.

The USS George A. Johnson was a destroyer escort of the Rudderow Class, displacing 1,450 tons, 300 feet long, a beam of 37'. She was crewed by 186 officers and men. The ship served both in the Atlantic and Pacific as an escort ship. In the Pacific, her job was to protect larger ships and supply convoys traveling between Pearl Harbor and various bases in the China Sea, Okinawa, Philippines and the South Pacific. After the war she was decommissioned in 1946, then later assigned to the 12th Naval Reserve district as a training ship from 1950 to 1957. 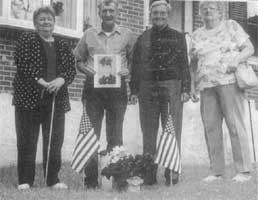 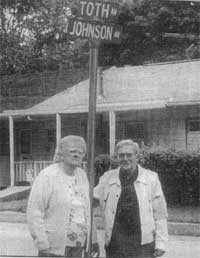