This story was first published as an article in the Downingtown Ledger on November 6, 2003, written by Joe D'Angelo. It has been edited for length and content

John Cesire Giannarino, according to his brother, Alfred, was a brother who always understood, cared, and gave of himself to family and friends. He was a fun loving, sincere, honest, and an all around great guy. Often his actions spoke much louder than his words. "I know I am a better person and blessed because John was always there for me and for his country," Alfred said. "He made the supreme sacrifice in the defense of his country."

John's real name in Italian was Cesire, but no one could pronounce the name. It sounded so much like cheese. Everyone in Johnsontown knew him as Cheese.

"As teenagers, we had many good times together. He was always fun to be with. Cheese was a great hunter and sharpshooter. He taught me how to use a gun and shoot. We often went hunting together.” Alfred said. 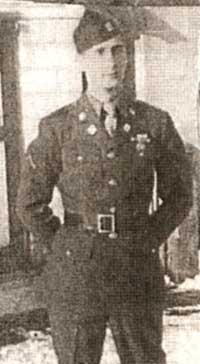 "Cheese also loved dancing. He and his friends often went to Fleetwood, outside Reading, to dance to the big bands, Benny Goodman and the likes. He was a great brother and stood up for people," Alfred said. "Cheese was also the best boxer around. He was some kind of fighter in Johnsontown, where they boxed often. He would measure up the guy, hit him once, knock him out. John and his close friends started the Good Neighbor Celebration held every Fourth of July at Kerr Park in Downingtown. On July 4th, boys and girls would learn how to use a bow and arrow, eat lunch, hold a fly fishing casting contest, have potato sack races, throw shoes in a pile. Whoever found their shoe first would win a prize. "Every year the guys really got involved and always had fun," Al finished. On June 3, 1943, Alfred graduated from Downingtown High School, but not before he was sworn in with the Army on June 1st. Alfred was sent to Fort Meade, Md. on July 15 and was in training to be an Army MP.
"Our mother died at an early age, when John and I were teenagers. John was always the big brother I looked up to. We used to shoot dice for a penny behind our garage. The day we got the news that Japan attacked Pearl Harbor. John, so eager, told me he had to join the military. He immediately left for Philadelphia to sign up. At 23 years old, John enlisted in the Marine Corps. He was inducted on January 3, 1942 and started his training on January 7 at Parris Island in South Carolina." "It was in my room where John and I had a personal brotherly talk the day before he joined the Marines. He told me to remember the good times, take care of the family, that he loved me, and to write to him whenever I could." 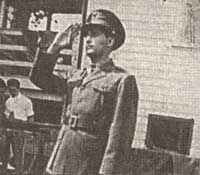 After eight months of basic training, John became an expert rifleman and one of the best bayonet warfare soldiers in Company A, First Battalion, Seventh Marine Corp. After basic training, John was home for a seven-day visit. Afterwards, he was shipped off to the South Pacific. On August 8, 1942, John's battalion landed in Guadalcanal. On Sept. 15, 1943, Al got a letter from his brother John.  "Dear Brother, Received your letter. Glad to hear from you. It looks like the war is going good for us and [I] think it will from now on. Hope you are well and happy in the Army. So be good. Your brother, Cheese."
Al learned through John's letters that his infantry took part in other invasions and often washed and swam in the rivers on the island. He once said he killed a 12-foot snake and wondered if its father was a 30-foot long snake. "Cheese, who always gave me advice, on October 5, 1943, not knowing it would be his last, wrote:

“Well Fred, how are you? I hope my letter finds you in good health and happy. As for me, all is going well and I am in the best of health. Look out for the women you take out. It's 100 to 1 she's no good for you. Have fun anyway. By the way, don't drink too much if you can help it. If you can, don't drink at all. Go to church as much as you can. Take care of your money; you may need it some day. It's always good to have some. Do your work well and do your best at all times. I hope you don't think I'm trying to boss you, brother. Take it or leave it. But it will help you out a lot if you try to do some of the things I asked you to do. Write home as much as you can so to let family know how you are. Take good care of yourself and may God bless you. Your brother, Cheese."

While on the way to Cape Gulgus, John got sick with typhoid fever. The Marines had no medicine to treat it so he was transported to the hospital in New Guinea to await a ship containing medical supplies. Unfortunately, the ship ran into a sea mine and was sunk, along with all the medicine. John "Cheese" Giannarino died in the hospital in New Guinea on Jan. 5, 1944, of typhoid fever. Henry Fazzine, a friend of the family, said he remembers Cheese as a family man and was very well liked in Johnsontown. “He was our idol. He was tough and a great athlete. As a boxer, he would never lose a fight and was a great football player, a great tackle. He and Morgan, Joe Madrigale, would take anything. If a car had a football, those boys would take it. Cheese was a super human being," Fazzine finished. John received the Secretary of the Navy Unit Citation for courage, outstanding gallantry and determination for successfully executing forced landing assaults against the enemy. He also, received the Presidential Unit Citation for his extraordinary heroism in action against enemy Japanese forces in Guadalcanal.

Today he is buried in the St. Joseph Cemetery in Downingtown.

The Japanese had a strong hold of Guadalcanal and occupied the three hills that rise around the rim of the cup of land which holds Borgen Bay, Hill 150, Aogiri Ridge and Hill 660. Not until those hills were in the hands of the Marines would the island and western New Britain be secure. The area was surrounded by swamp and rain forest. It was this fight that gave the Marines its character. After the airfield was captured, a task force was built around the Seventh Marines. The scouts who went out in advance were ambushed. The Battalions swinging out southeastward went through swamps and shallow streams which ran swiftly below high banks where Japanese snipers fired as the Marines crossed. "The jungle exploded in a heat of fire," according to a Marine combat correspondent. The Marines still on the friendly side of the stream pumped automatic weapons fire across to cover the withdrawal. All that day, January 2, 1943, the Marines fought back and forth across the stream. Some men crossed it as many as four times. On the morning of January 3, the Japanese began to fire mortar shells along the banks of the streams, while the Japanese snipers moved forward to cover the stream itself so no one could cross safely. Soon the two battalions, the Third and Seventh, asked for more firepower and requested tanks. As the three tanks, oblivious to the bullets glancing off their armor, grunted across suicide creek, opening fire on the Japanese bunkers and overtaking their positions, the men of the First Battalion, Seventh Marines, were left to hold target hill. The next day, the First Battalion was sent forward to overtake Hill 150. Through driving sheets of rain, they covered the strip along the beach quickly, got across a sand spit and walked 200 yards near the hill. Company A got into heavy fire fighting as the Japanese charged the hill with fixed bayonets, crying in their shrill, excited voices. The Marines waited and attacked; firing every weapon they had, squeezing triggers until their fingers ached. Many Japanese fell, others pulled back. Three more times they charged, falling again and retreating. After the fifth time, the Marines counted more than 200 Japanese dead and Aogire Ridge and Hill 150 was defended. This enabled Company A to capture two Japanese prisoners and weapons. The Marines of Company A had reached their objective.

During WW II, Japan lost 2,000,000 soldiers while America lost 500,000. There were 13,770 known typhoid fever deaths, as American troops fought all over the globe. Typhoid fever, caused by the bacterium salmonella typhi is still common in the developing world, where it affects about 12.5 million persons each year.