Harry Robert Bernard was born on December 12, 1918 to Leonard “Frank”and Maude Bernard who then lived in Wagontown, Pennsylvania. Harry was one of eight children. His father worked at Lukens Steel in Coatesville.

Harry graduated from Scott High School Class of 1936 (with Heroes Vernon Rubincam, John Grycky, and Herbert Hagamon).
After graduation, Harry worked at Lukens Steel. He played baseball in the Coatesville Suburban Twilight League. Harry married Ida Davidson, and they had two children: Ronnie, and Dorothy Anne.  When our country was attacked, Harry enlisted in the Marine Corps. After basic training, he was sent overseas to serve with the 5th Marine Division. The division was sent to Iwo Jima. PFC Harry Bernard was Killed In Action on March 7, 1945. Harry was buried in a military cemetery on Iwo Jima. He was later returned for burial in his home country at Fairview Cemetery in Coatesville on May 6, 1948 with full military honors.  His brother Willis served during the war. 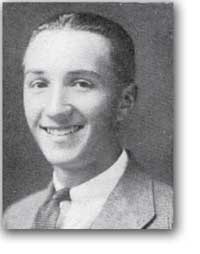 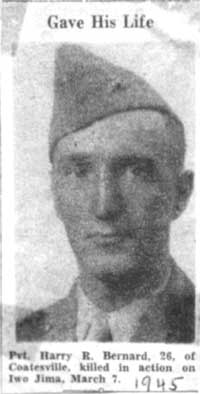