George C. Woodward was born on October 17, 1917 to Clyde and Jennie Woodward who lived in West Caln, Pennsylvania. George's father was killed in a mill accident during World War I.

George partnered with Harold Detterline to open and operated D & W food market on Lincoln Highway. The partners purchased Hubbs store in 1940 (part of a chain of food stores) for which they had previously worked. The Hubbs stores advertised “the finest of food products at prices which are fair”, and the partners continue this high standard.

George who preferred to be called by his middle name, “Clyde”, was a member of the Olivet Methodist Church and the Sadsburyville Fire Company. Both George and Harold were called into service for their country at the same time, and they closed their business to answer their call. George entered the Army on August 4, 1943. After basic training he was sent overseas and assigned to the 34th infantry division which was then in combat in Italy. The 34th advanced to take Mount Belmonte in October, and then dug in for the winter south of Bologna.  Private First Class George Clyde Woodward died non-battle on November 2, 1944 in Italy. His wife, Arlene, received a telegram that he was missing in action and later that he was killed in action. A fellow soldier wrote to the family to explain what happened. He explained that the soldiers were crossing a river in Italy on their way back from the front, and that George fell into the water when he lost his hold on a guide rope and was swept down stream. His body was later recovered and buried in a local cemetery.
In 1949, his remains were returned for burial in his home country. His body was transported by train from Brooklyn, and on February 16, 1949 a private funeral service was held at the Gensemer Funeral Home followed by interment at the Fairview Cemetery. George’s business partner, Harold survived the war. 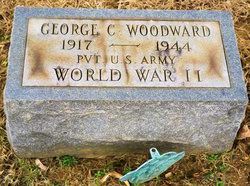 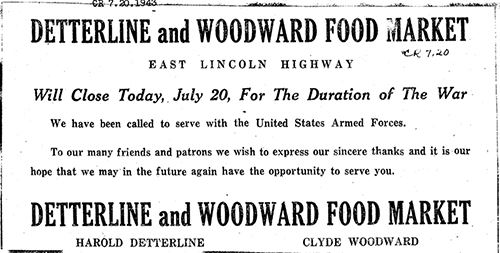