Adon Taylor Wills was born  in 1912  to Harry and Iva Wills in West Chester, Pennsylvania. Adon was an only child.

Adon is one of those persons who keep the class running along cheerily.  At noon, he walks into study-hall, tosses his brief-case onto a convenient seat, and makes the best use of his time in study; his smile and good nature keep him in our thoughts.  He will go into the business field.

Adon graduated high school in 1930, then attended the Eckels College of Embalming in Philadelphia, graduating in 1933. Adon became a State Licensed Funeral Director and obtained employment in Coatesville at a funeral home.  He became very active in community service. He was a past president of the West Chester Home Cluster Group, the oldest social and literary society in West Chester, which was active from 1877 through 1959. 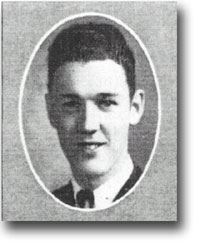 Adon was a member of the Masonic Lodge and the tall Cedars; the Y’s Club (past of the YMCA) in Coatesville; Past President of the Sons of America of Downingtown and the Rod and Gun Club of Thorndale. Adon entered service in the Army and served in Fort Lewis, Washington. He was stricken with an illness and was sent to the Letterman Hospital in San Francisco, California for removal of a brain tumor. Private First Class Adon Taylor died non-battle on September 13, 1942 at the Letterman Hospital. A memorial service was held at the Methodist Church in West Chester as part of the Sunday evening service on September 21st. He was the first member of the church to perish in the war. Fifty members of the Lodge #322 augmented the large congregation in attendance. A service flag was presented with one gold star for Adon. Taps was sounded from the churches balcony. Adon was buried at Greenmount Cemetery.