Ferrier H. White was born 1921 in Elyria, Ohio to Henry and Fosterina White. Ferrier was one of three children.

Ferrier moved around quite a bit finding jobs as a mechanic and repairman. He lived for a time with his aunt, Alice Kyle in Coatesville.

Ferrier enlisted in the Army Air Forces on January 29, 1942. Ferrier received pilot training at Tuskegee, Alabama, where African-American pilots were trained. These pilots later became  known as the "Tuskegee Airmen".  Ferrier received his wings and commission as a Second Lieutenant upon graduating from Tuskegee flight school on October 16, 1944 with class 44-I-1-SE.

The 332nd was the first all African-American Fighter Group. The 332nd Fighter Group consisted of the 99th, 100th, 301st, and 302nd Fighter Squadrons. The Group escorted bombers, losing very few to enemy fighters. 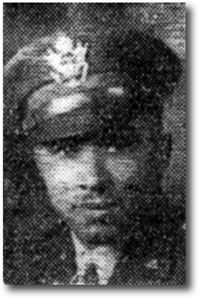 The Group initially flew P-40 Warhawks, the briefly P-30 Aircobras in March, 1944 (an unusual aircraft with the engine was behind the pilot making room for a 37 mm cannon which fired through the propeller shaft). In June - July they transitioned to the P-47 Thunderbolts, then to the P-51 Mustang. The Group painted the top of their rudders red to distinguish themselves, and hence known as the “Red Tails”. Ferrier was assigned to the 100th squadron. The first squadron, the 99th was sent overseas based in North Africa in May, 1943, then to Italy after portions of that country were liberated by the US. The 99th was joined by the newly trained pilots of the 100th, 301st and 302nd, and consolidated as the 322nd Fighter Group. On April 5, 1945 Second Lieutenant Ferrier H. White was lost over the Adriatic Sea. Ferrier is honored on the tablets of the Missing in Action at the Florence American Cemetery in Italy. Ferrier is also honored on the Oberlin Ohio Soldiers Monument.