Nevin F. Ulmer was born on November 20, 1912 to Newton and Rena Ulmer who lived in Phoenixville , Pennsylvania. Nevin was the second of six children.

Nevin was inducted into service in the Army on May 2, 1942, three weeks after his wedding. Nevin received training at various places including Fort Eustis, Virginia, and Camp Davis, North Carolina. He was assigned to the 34th Infantry Division, the same division that heroes Norman Becker, Francis Lyons, James Manning, Arthur Pickell, William Taylor, and George Wright served.

The 35th Infantry Division served Tunisia, North Africa in November, 1942, and then moved to Italy, landing at Montemarano in September, 1943. 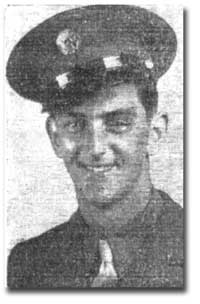 On October 11, 1943, his parents received Nevin’s last letter home, in which he wrote that he was in Italy and was feeling fine. That letter would soon be followed by a dreadful telegram. In his last letter to his wife Helen, Nevin wrote:         When I arrive in Rome, the next Allied objective, I will send you a Christmas present from the Holy City.
Private First Class Nevin R. Ulmer died of wounds on October 17, 1943. In August, the family received a letter:

In grateful memory of Pfc. Nevin R. Ulmer, who died in the service of his country in North Africa area October 17, 1943.  He stands in the unbroken line of patriots who have dared to die that freedom might live and grow and increase its blessings.  Freedom lives and through it he lives in a way that would humble the undertaking so most men.”

“F. Delano Roosevelt, President of the United States of America”


Nevin was awarded the Silver Star awarded posthumously, for his gallantry in saving the life of his squad leader and salvaging supplies in the face of enemy fire. Nevin was buried at a local military cemetery. After the war, at the family’s request, his remains were shipped home for reburial in his home country. On November 23 1948, Nevin was buried with full military honors the Beverly National Cemetery in Beverly, NJ. His brother and fellow hero, Milward, was buried at the same place on the same day.