Milward F. Ulmer was born on October 26, 1919 to Newton and Rena Ulmer who lived on in Phoenixville, Pennsylvania. Milward was the fifth of six children.

Milward was known as an athlete, playing baseball in high school and later on the Weiland team. He was a member of the Mont Clare United Brethren Church.

Milward married Helen Horvath and they lived in Phoenixville.

Milward entered service in the Army on October 18, 1942. He received training at camps in Mississippi, Louisiana, Arizona, California and New Jersey, before being shipped overseas to North Africa in January, 1944. He served with the 337th Infantry Regiment of the 85th Custer Division, of the Fifth Army in Northern Italy. This was the same regiment as Hero James Marinelli. Milward was then sent to Italy, where on May 16th he was wounded by shrapnel in his right arm. He was hospitalized for six weeks and after recovering, returned to duty. 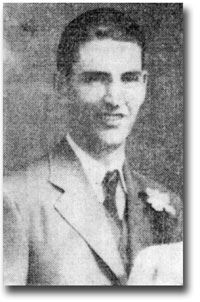 Staff Sergeant Milward F. Ulmer was killed in action on October 26, 1944. Milward was buried at a local military cemetery. After the war, at the family’s request, his remains were shipped home for reburial in his home country. On November 23 1948, Milward was buried with full military honors ay the Beverly National Cemetery in Beverly, NJ. His brother, Nevin was buried at the same location on the same day. Besides his wife Helen, Milward was survived by a daughter, Helen, who was 18 months old at the time of his death.