Edward Albert Stecz was born in June 22, 1922 to John and Mary Stecz of Phoenixville, Pennsylvania. Edward was the third born of five children. His father immigrated from Poland, his mother from Czechoslovakia, but all their children were born here.

Edward graduated from Phoenixville High School in 1940, the same year aS Hero Willis Stoltzfus. Edward played basketball, football and was on the track team. He was in the class play and class president his senior year. His high school yearbook describes him as:


“Babe,” with his ready sense of humor, is like a ray of sunshine on a cloudy day. When one is feeling despondent, the very presence of this “gloom doctor” is enough to chase the blues away.

Edward was a member of the Sacred Heart Church and a member of the Jednota Lodge, Holy Name Society. Edward went on to attend Temple University in Philadelphia completing 3 of 4 years. He played varsity football. 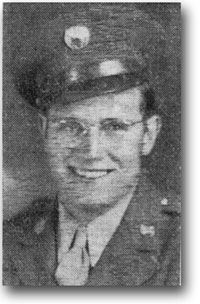 Edward entered the Army in May, 1943 and received training at Fort Meade, Maryland, Fort Eustis, Virginia, Fort Bliss Texas and Camp Carson, Colorado. He originally trained in antiaircraft artillery, but later transferred to the infantry. He was shipped overseas to the European Theater of Operations in July, 1944,serving with the Second Infantry Division.  The Second Infantry Division went ashore on Omaha Beach Normandy on June 7. They  fought their way across France liberating the French. Edward joined the division during this drive. The Second continued into Belgium, liberating that country, and preparing to attack Germany around the German Defensive Siegfried line.   On December 11th, Edward’s division was ordered to attack and capture the Roer River dams. The Germans staged a massive counterattack through the Ardennes (Battle of the Bulge) in mid December. This forced the Edward's division to withdrawal to Elsenborn in a defensive posture until the enemy was stopped. It was during this battle that Edward was mortally wounded. Private First Class Edward A. Stecz was Killed In Action on December 13, 1944. Edward was buried locally at the Henri Chapelle Military Cemetery in Belgium. Upon request of the family, Edward was returned for burial in his home country. Funeral services were held on December 11, 1947, followed by High Requiem Mass at Sacred Heart Church. Edward was buried at the Church’s Cemetery. Tech 4th Class John W. Prehoda from Chicago who escorted Edwards remains, stood guard over the casket. Honorary Pallbearers were provided by the Allied Veterans. Fraternity brothers and classmates from Temple University also were involved in the service. The last letter received by the family was sent to his sister Teresa, dated December 8th, in which he said his unit was in a rest camp in Belgium after intensive combat. Edward's father received word that he had been awarded the Combat Infantryman Badge for “superior performance in combat in the front lines in France and Germany” just 24 hours before he received notification of his death. His brother, John, served with the Army Air Corps during the War.