Clarence K. Smith was born on April 5, 1922 in Spring City, PA. Clarence was one of ten children. His brothers Roland and Robert Jr. were also in the service.

Clarence was a graduate of West Chester High School and worked on his father's farm before entering the Army.

Clarence entered the service on October 23, 1942 and became a radio mechanic with the Army Air Corps.  After his training was completed, he was assigned to the 701st Bomb Squadron, 445th Bomber Group, stationed in Tibenham, England. The 445th was also the unit to which actor (Lt. Col.) James Stewart was assigned. 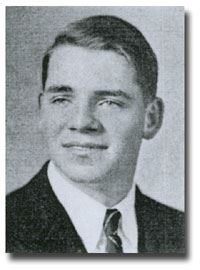 On October 18th, Clarence was one of 24 passengers and crew aboard the B-24H Liberator Bomber 42-50347.  Among those on board were 15 commissioned officers who were being ferried back to Tibenham after seeing more than 30 successful combat missions. That afternoon, in heavy rain, the aircraft exploded in mid-air and crashed into a field near Birkenhead, England. According to witnesses, the plane was clearly in trouble as it lost altitude overhead. The plane shuddered in flight and began breaking up before it hit the ground, leaving bodies and wreckage strewn over the field. The crash site, located in a field between Landican and Thingwall, about two miles from Liverpool, was a scene of utter carnage. As onlookers rushed to help any survivors, small fires continued to burn, igniting ammunition from the plane's weapons. Sadly, there were no survivors to help. Some victims were found with partially opened parachutes, others wore life jackets, thinking they were about to crash into the nearby Mersey River. All 24 men on board the B-24 were lost. The following is an excerpt from an article on the crash, written by 445th Bomb Group veteran, Fred Biscetti for The Journal 2nd Air Division. Volume 45 Number 1, Winter 2006:

Among the witnesses was 16-year-old Doug Darroch of Oxton Road, Birkenhead. He saw the aircraft's final dive and later walked along the railway track to the wreckage site, where recovery was progressing under arc-lights. Young Darroch never forgot the accident and became determined to put up a memorial to the airmen who had died. In 1995, fifty-one years later, Doug Darroch and his family paid for and erected in Birkenhead a very impressive tribute - a rugged stone monument bearing a plaque engraved with the words:
IN MEMORY OF THE 24 AMERICAN SERVICEMEN OF THE U.S. ARMY AIR FORCE WHO DIED WHEN THEIR AIRCRAFT
EXPLODED IN MID AIR ABOVE THESE FIELDS ON 18. OCT. 1944.

In 2001, after Darroch had learned the names of the American victims, he added a larger plaque listing the names, ranks and serial numbers of the airmen.

The cause of the crash remains undetermined, but there are at least two theories. One theory is that of a test pilot, Ralph Stimmel, who had flown that same B-24 to Ireland and had reported that there was a strong odor of gasoline in the plane indicating the possibility of a leak. Stimmel passed this warning to the pilot before the ill-fated flight back to Tibenham. Another theory is that the B-24 iced up in the low clouds and stalled. The pull-out from the dive that followed the stall stressed the airframe so much that it caused the aircraft to break up and plunge to the ground, where it exploded.

Ironically, this was the second tragic event for the 445th Bomb Group in one month. Three weeks before, on September 27, the 445th suffered the highest group loss in Eighth Air Force history when 35 of its 37 B-24s were shot down in a matter of minutes in an attack by FW-190s and ME-109s during a mission to Kassel, Germany with a loss of 117 airmen, 112 of them later confirmed as killed in action.

The tragedy of the B-24 crash over Landican near Birkenhead was that most of the 24 victims had already survived more than 30 combat missions against the Nazis, only to die as idle passengers on a routine flight in an old bomber crashing in an English field far from the flak-filled skies high over Europe. All honor must go to Doug Darroch, his family and his community for their tribute to the American airmen - truly a gesture of friendship and appreciation by a grateful and sympathetic people, initiated by a 16-year-old boy in 1944.