Milton L. Shantz was born on April 16, 1922 to CE Williams and Milton Shantz who lived in Phoenixville, Pennsylvania. He had one sibling.

Milton entered service in the Army in 1942. After basic training, he was assigned to the121st Regiment, 8th Infantry division. The 121st Regiment as part of the 8th division embarked for Europe arriving early December, 1943. Stationed in Ireland, they began intensive training for the Normandy Landings.

Milton’s regiment went ashore in Normandy on July 4, 1944 on Utah Beach. They began combat operations two days later, joined by the rest of the eighth division on July 8th. They liberated Rennes in August and the port city of Brest in September (Hero Sherwood Hallman was instrumental in the battle for Brest.) It was during this drive to the coast near St. Patrice De Claids, that Milton lost his life.

Private Milton L. Shantz was killed in action on July 27th in France.  He is buried at the Normandy American Cemetery in Collevill-sur Mer, France. 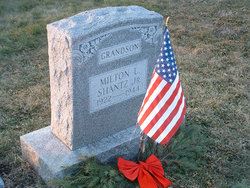