Arthur Jay Rynier was born on January 15, 1918 to Adam Ellsworth and Elsie Elisabeth Rynier who lived in Lancaster County, Pennsylvania. He was one of seven children.

Arthur had a high school education, and was working as a stock clerk when hen he entered the service on July 14, 1942. He served with  C Company, 143rd Infantry Regiment.

A press release from the government gives details on Arthur's death:

He was assigned to his infantry company headquarters as a runner in action in the Mediterranean theater on February 16. An intense mortar barrage fell on the position lasting two hours. Throughout he remained on duty at the telephone and maintained unbroken communication with the platoons and Battalion headquarters. On one occasion he was blasted from his foxhole by a shell and frequently he was charged by the furious shelling. He courageously continued his work until fatally wounded by a mortar shell.

Arthur was buried at a local cemetery, but was brought back home for burial after the war. He is buried at the Paradise Mennonite Cemetery, in Lancaster. 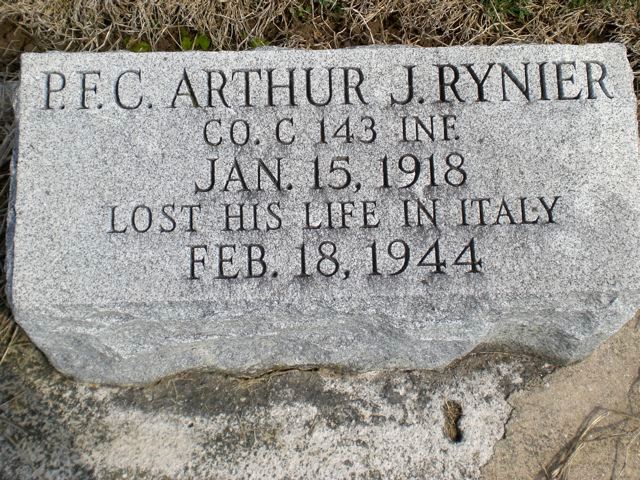