Clarence Patton was born on February 1,1924 to Leo and Bessie Patton. Clarence grew up in Downingtown along with six siblings. The following archival newspaper articles tell the story of his life and service to his country.

Discharged from the Army the day before Pearl Harbor, Corporal Clarence Patton, 31, of Downingtown was called back into service six weeks later. Yesterday, his wife, who is living at the Downingtown address, was informed by the War Department that he had been killed in France.

Corporal Patton, who was attached to the 4th Armored Division, part of General Patton’s Third Army, was inducted into the armed forces first in June, 1941. He was then sent to Fort Knox, KY for training with an armored unit. On December 6th, he was given an honorable discharge from the Army because he had passed the 28-year-old age limit.

The next day, the Japanese attacked our forces at Pearl Harbor and six weeks later Cpl. Patton was back in the Army and stationed at Pine Camp, N.Y., the same camp he had left six weeks earlier. He was then sent to various camps across the country and for two months was attached to a guard detail for German war prisoners in Mississippi. 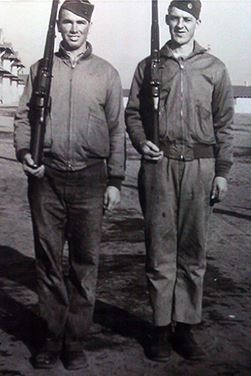 One of the nation’s highest awards, the Distinguished Service Cross, has been awarded posthumously to Corporal Clarence Patton, late of Downingtown, who was killed in action in France last September 12.

Patton’s widow, Mrs. Florence L. Patton, of Glen Moore, has received a letter from Adjutant General Ulio telling her that the medal will be presented to her.

The citation which accompanied the award reads as follows:

For extraordinary heroism in connection with military operations against an armed enemy. On 29 August 1944, a platoon of reconnaissance troops, of which Corporal Patton was a member, advanced as the leading element of Combat Command xxx,xxx Armored Division, on the town of xxx,xxx. (sic)

“The platoon was immediately counter-attacked by an enemy force which out-numbered them by more than twenty to one. Corporal Patton stood fast in his advanced position and killed more than twenty of the enemy with small arms fire. He so inspired his men by his conspicuous bravery that they held their positions against the overwhelming odds, killed more than one hundred and fifty of the enemy, and held the town for over two hours, until relieved by friendly infantry.

“Following this heroic action, Corporal Patton continued to serve with his reconnaissance platoon until he was killed in action of (sic) 12 September 1944 while engaged in hand-to-hand combat with the enemy at xxx,xxx. (sic)

His outstanding heroism, his consistent eagerness to close with the enemy, and his supreme devotion to duty exemplifies the highest traditions of the military forces of the United States.”

Clarence Patton is buried at the Lorraine American Cemetery and Memorial near the town of St. Avold, France.