George W. Newborn was born on June 26, 1912 to Mr. and Mrs. James Newborn. He grew up in Spring City, Pennsylvania. George was one of two children. He graduated from Spring City High School and continued his education at the Pierce Business School in Philadelphia. Afterwards, he found employment as a clerk at the office of the Floyd-Wells Company in Royersford which made coal-fired kitchen stoves. George later married Dorothy Peoples just before entering the service. George entered the Army on November 2, 1942. He received training at Camp Forrest, Tennessee, and the then received five months of desert warfare training. He was shipped overseas to the European Theater of Operations with the Eighth Army just before Christmas, 1943. He was stationed in Northern Ireland with the 121st Infantry Regiment, 8th Infantry Division, the same division in which heroes John Green and William McCullough served. George's division landed in Normandy, France on July 4th, to help liberate France. The French hedgerows permeated the area. They divided numerous small fields, and consisted of thick hedges planted on top of earthen and stone walls 4-10' high. Allied troops crossing the open fields were often mowed down by crack German troops who were well concealed in the thick hedges, and who had their guns and artillery zeroed in to markers. Each hedgerow became a battle in itself, with very heavy casualties. American innovation shone through as later in the battle, an American Sergeant came up with an idea. He improvised, using scrap metal to form a type of toothed plow which he welded onto the front of a tank, to plow through the hedgerows 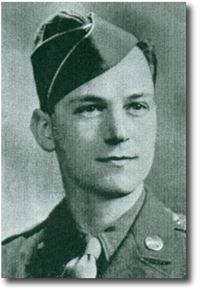 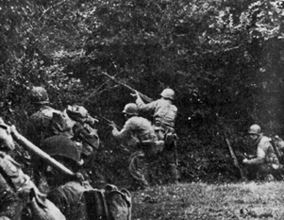 Private First Class George W. Newborn was Killed In Action on July 12, 1944 in France. His wife received the government telegram on Monday morning, August 1st. His last letter home informed his wife he was in France and was dated July 6th, just 6 days before he was killed. George is interred at the Normandy American Cemetery at Colleville-sur-Mer.  He was posthumously awarded the Purple Heart.