Robert Grier Montgomery was born on October 9, 1922 to Ethel and Thomas Montgomery who lived in Parkesburg. Robert was one of three children.

Robert attended Parkesburg High School. He played on the school basketball team which won the district championship 1939- 40. Robert was a member of the Boy Scouts Troop 135. Robert attended the Parkesburg Baptist Church.

Robert was inducted into the Army on January 6, 1943. He received basic training at Fort McClellan, Alabama, and stationed at Shenango, Pennsylvania, and Camp Kilmer New Jersey.  He was then sent to Plymouth, England to await the invasion of Normandy.  Robert served with the 29th Division, Company I, 116th Infantry.

On June 6th, Robert landed on the heavily defended coast of France, on Omaha Beach, probably in the third wave. He survived the hours of slaughter, pinned down on the Beach by intense fire with heavy casualties, until they were able to break through the German defenses. To glimpse the hell he endured, one only needs to watch the first 20 minutes of the movie "Saving Private Ryan" and stretch the 20 minutes to over two hours. 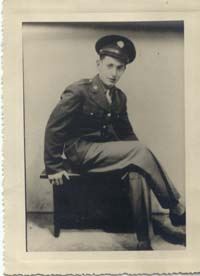 Robert survived as a part of the largest invasion in history, but he died on June 18th from wounds received the previous day. PFC Robert Montgomery was buried in a military cemetery in France, on the land he fought to liberate. The family received the fateful telegram in July. Robert was the first casualty reported from Parkesburg. There were over 200 from the borough who served in the Armed forces during World War II. A Memorial Service was held at the Parkesburg Baptist on August 6th, during which a gold star was unveiled and placed on the Church's service flag. Robert's remains were returned home in the spring of 1948. A funeral service was held at the Wilde Funeral Home, and interment with full military honors at the Upper Octorara Cemetery. Robert's brothers also served during the war: Thomas in the Navy, and Edward in the Army. Parkesburg VFW Post 4480 was instituted on October 21, 1945, named in honor of Robert G. Montgomery. The Parkesburg Girl Scout Troop #36, named their older patrol the HMCC patrol in February 1945, to honor four fallen Parkesburg youth: William Hoyer, John Clark, and Wilbert Conover.