Robert John Miller was born in July, 1922 and grew up in Malvern, Pennsylvania. His father, Frank, was a World War I veteran.

Robert graduated from the Tredyffrin-Easttown High School in 1940. Robert was on the Forestry Committee and the All State Orchestra Transportation Committee. After school, Robert found employment at the Sun Shipbuilding Company in Chester.

Robert married Doris Clayton of Malvern. They moved to a residence on Sugartown Road.

Robert was inducted into the Army entering service on July 7, 1942. After basic training at Camp Forrest, Tennessee, he was sent to Fort Dix, New Jersey. Robert was assigned to Company A, 318th Infantry Regiment, 80th “Blue Ridge” Infantry Division, also known as “Patton’s Troubleshooters”. Robert's Division was then sent overseas to England, sailing July 4, 1944 aboard the luxury liner converted to a troopship – the SS Queen Mary. 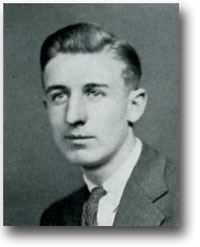 Robert’s Division was ferried to France on LSTs (Landing Ship Tanks) and Liberty ships, landing at Omaha Beachhead in Normandy on August 2 (D-Day plus 57). On August 8th his division went into battle over the LeMans bridgehead in the XX Corps area. They were hastily ordered into battle to stop the German counterattack at Avranches. Robert was wounded and hospitalized on August 12th, and upon recovery, returned to duty on October 4th.  The 80th Division maneuvered to close a loop around the Germans, called the Falaise Pocket, then mopped up the area capturing thousands. In November, Robert’s division maintained a defense west of Seil, preparing for the Third Army’s sweep into the vital industrial Saar Basin. This sweep began on November 8th with the 80th Division advancing across the basin with heavy casualties. Private First Class Robert John Miller was Killed In Action on November 8, 1944 in France. He was buried in the Lorraine American Cemetery in St. Avold (Moselle), France. Robert was honored with a Purple Heart and the European African Middle Eastern Campaign Medal with one bronze service star.