Omer A. Miller was born in April 28, 1922 to Bert and Sue Miller who lived in Atglen, Pennsylvania. His father worked as a stone cutter selling tombstones, which were prominently displayed in their front yard. Omer was an  only son with two older sisters..

Omer graduated from West Fallowfield High School in 1940 and obtained employment as a timekeeper at Bethlehem Steel Company.  He was a member of the Atglen Methodist Church.

Omer enlisted in the Army on October 16, 1942 and received basic training at Camp Shelby, Mississippi. He received additional training in Louisiana, and extensive training in desert maneuvers in California.

Corporal Omer A. Miller was Killed In Action on October 23, 1944 in Italy. His parents received a government telegram on November 15th informing them Omer was Missing In Action.  A telegram received on November 27th, informed them of their son’s death.

Omer was buried at a local military cemetery. After the war, he wasbrought home for burial in his home country. A funeral service was held at the Atglen Methodist Church on November 15, 1948. Interment was at the church cemetery with full military honors. 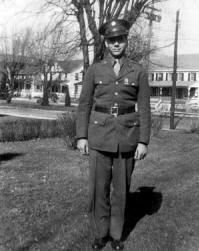