Thomas John Miles was born on July 9, 1920, to Thomas and Odette Boyer Miles, who lived in Shawnee, Oklahoma. Thomas was one of four children. The family moved to New Jersey in 1928, and then to West Chester, Pennsylvania, in 1932.

Thomas’s father was first cousin to Jim Thorpe, the famous Indian athlete (declared the greatest athlete of the first half of the 20th century).

Thomas graduated from  West Chester High School in 1939 where he was on the track team, football team and was a member of the Boys Athletic Association and Cooperative Council, President his 3rd year. The yearbook says: Tommy has gained great renown by his ability in athletics, his personality, ambition and enthusiasm. 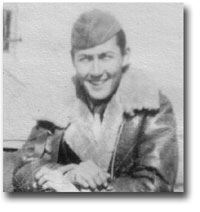 Thomas sister remembers him as a great big brother – kind to his little sisters and very protective of them. He was remembered as being outgoing and good-natured. After high school, Thomas went on to attend the Pierce Business School in Philadelphia while working at Lukens Steel. He married Vera Columbia Bostelle on December 27, 1941 Thomas enlisted in the Army Air Corps in 1941. He was sent to Penn State for basic training, and aviation training. Thomas received training as a gunner, and flew on B-17’s as a tail gunner. He flew on patrol missions out of Panama. The Canal was a very strategic site, and had to be well protected. Thomas was stationed in Panama for over a year. He later applied for training as navigator and after training was sent to England, to fly bombing missions over enemy territory.
After the war, he transferred in the Military Air Transportation Service (MATS) which was formed in 1948 with the Army Air Corps which became the US Air Force. MATS combined the former Air Transportation Command and the Naval Air Transport Service. Thomas was promoted to Master Sergeant. From 1948-1949 he served in the massive Berlin Airlift. The Russians, due to ‘technical difficulties’, closed the roads through East Germany to West Berlin. Berlin was deep inside of East Germany and itself was divided into a Communist East Berlin, and a Free West Berlin. Their plan was to starve the West Berliners, so they would surrender, and no longer become a thorn in the side of the Russians, seeking to control all of Germany. The Allies responded with an unprecedented and an impossible task – fly in supplies, milk, coal, food, clothing and other the necessities of life, to a war devastated people – our former enemies. At the peak, the aircraft landed every three minutes round the clock, and in mid April managed 1,398 flights carrying 12,940 tons in a single day. In May, the Russians gave up and opened the roads to West Berlin. After the success of the Berlin Airlift, MATS activity returned to a normal level. Master Sergeant Thomas John Miles was Missing on October 15, 1951 when his aircraft went down. He was radio operator on a Boeing C-97 Stratofreighter - a big-bellied transport evolved from the famed B-29 bomber. He was on a flight from Europe back to his base, Westover AFB in Chicopee, Massachusetts. His plane went down near the Portuguese Azores. His aircraft was never found.