Stephen R. Mendrey was born on January 17, 1920 to John and Julia Mendrey who lived in a rural area near Phoenixville, Pennsylvania. His father emigrated from Czechoslovakia in 1907. Stephen was the third of eight children. There were also two other children that predeceased him.

Stephen attended East Pikeland School and was a member of the Sacred Heart Church, as well as the Polish American Citizen’s Club, and a social member of the George A. Amole Post 47 American Legion in Pottstown. He later worked at the Woolen Mill in Bridgeport.

Stephen entered the service in the Army in February, 1942. He received training at bases in Kentucky, New York, Tennessee, Texas as well as desert training in California.

Stephen was sent to the European Theater of Operations in England in January, 1944, assigned to serve with the 10th Infantry Battalion, 4th Armored Division. The 10th Battalion was one of three infantry battalions assigned to the 4th Armored Division (10th, 51st and 53rd).  This was the same division that Heroes Melvin Bailey, Leo Brignola, and Ford Gurrell served. 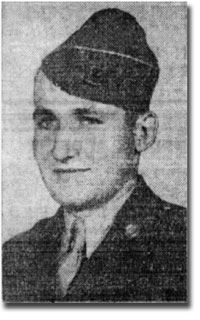 Stephens’s unit underwent extensive training in England for several months. They went ashore on Omaha Beach, Normandy on July 11 (D-Day Plus 33). They entered combat on July 19th. Stephen’s division moved to cut off the Brittany Peninsula, and then turned east for a rapid advance into the heart of enemy controlled France and successfully defeated several German Panzer Brigades in the Lorraine area.  Corporal Stephen R. Mendrey was Killed In Action On October 2, 1944 in France. He is buried at the Lorraine American Cemetery, in St. Avold, France. He was awarded the Purple Heart. At the time of his death, Stephen's brother John was serving in the Army as an MP in the Panama Canal Zone.