Edward Patrick McCormick was born on September 29, 1920 to John and Hannah McCormick who lived in West Chester Pennsylvania. Edward was one of three sons. Edward attended the St. Agnes Catholic School. He played basketball, towering 6'5" over the other players and was affectionately nicknamed “Big Ed”, and “Big Stoop”.  The yearbook says:

“Every inch of his unusual height is put to use, and need we say he was a most valuable center on our basketball team. He was captain of both the school and senior tam. His frankness, kindness and sincerity make him a friend to all, while his aptitude for business makes us hope that in him we will have a successful representative. With a feeling of good-will we leave you, 'Stoop'.” 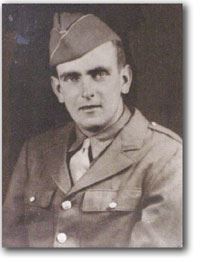 After graduation, he obtained a position as Assistant Manager at the A&P Supermarket. Edward entered the Army on January 9, 1943. He received training at Fort McClellan, Alabama, then shipped out to the European Theater; serving in North Africa, and later in Italy. He never received a furlough before shipping out – his mother never saw him in uniform. Edward entered and trained with a friend from West Chester – hero Hero George Wright, although in his last letter sent home, dated November 28th, Edward wrote he had not seen George for nearly a month. Corporal Edward Patrick McCormick was Killed In Action on December 1, 1943 in Italy by artillery fire while serving in the Fifth Army.  Edward’s mother, received the telegram that he was Missing In Action on Christmas Eve, 1943. She had just been discharged from the hospital for a serious illness and was staying at her sister's house. Edward's father had passed away in 1939.   On January 10, 1944, Edward’s mother received a telegram that her son was Killed In Action. Edward was buried in a local cemetery in Italy. His chaplain, Arthur J. Bojcun wrote:

“Funeral services were conducted at the grave by a Catholic Chaplain and your son is now at rest in a beautiful and well-kept American military cemetery in Southern Italy. Each grave is marked with a plain white cross, bearing the name and home address of comrades who have also given their lives for the same cause. The location of this cemetery will be given to you by the War Department when military security permits.

Corporal McCormick’s’ life as a soldier and a gentleman was a worthy tribute to you and his country he so proudly served.”

A Solemn High Requiem Mass was celebrated at St. Agnes Catholic Church on January 17, 1944. An additional mass was requested by the members of the First West Chester Fire Company. Edward's mother, searching for more information on her son’s death received a letter from her son’s unit chaplain.


“Your son was killed in action on the first of December, 1943. It is my sincere prayer that you will find comfort and understanding in the following information:


Company G was in the approach march, moving up to relieve another company from a bitterly contested hill. They had advanced about 500 yards when subjected to an enemy artillery barrage. There enemy shells landed in the midst of the Third Platoon. Of which Edward was a member. When the smoke had cleared away friends of his found he had been killed instantly by fragments of one of the exploding shells.

Corporal McCormick’s’ life as a soldier and a gentleman was a worthy tribute to you and his country he so proudly served.”

His mother received about three hundred letters of sympathy. Edward’s body was returned to his home country on board the Transport Carroll Victory with Hero Chace Gilmore in 1948. A funeral was held at the residence of his mother. The funeral procession traveled north on Church Street and paused at the front of the West Chester Fire Company where the bell was tolled in his memory. The procession continued to Saint Agnes Church for Mass.  Interment with full military honors was at Saint Agnes Cemetery. The Butler-O’Connor-McCormick Post 106, Veterans of Foreign Wars, named in part to honor Edward, was in charge of the military arrangements. Edward's brother, Henry served in the Army during the war. The Chambers family donated one of the four benches for the Garden of Honor at the West Chester Borough Hall in memory of Edward.