James Richard Lykens Jr. was born in 1923. He was one of four children. James was raised from the age of 10 by his Uncle, A. Victor Lykens, who lived in Caln, Pennsylvania James attended schools in Caln where he received the Legion award for his good work. He graduated from Coatesville High School in 1941. His yearbook description makes reference to "…looking forward to being an aviation mechanic.”

After graduation, James went to school in Williamsport, Pennsylvania for aviation mechanics. He then obtained employment at the Middletown Airport in Harrisburg.

James enlisted in the Army Air Corps on January 7, 1943. After basic training, he received advance training as radio operator/gunner on a B-24 Liberator bomber, in Florida, Nebraska, New Mexico and California. He was sent overseas to the Pacific Theater of operations in January, 1944.

James was assigned to the 372nd Bomber Squadron, of the 307th Bomb Group, Heavy. In a letter to his Uncle, James said he was stationed in the Admiralty Islands which are located in the Bismarck Sea just north of New Guinea. 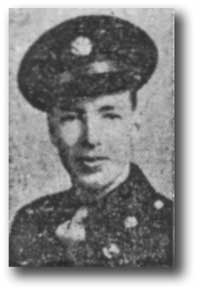 On a mission to bomb Yap Islands, located north of New Guinea below Guam, James’s bomber was shot down.  Sergeant James Richard Lykens Jr. was Killed In Action on June 25, 1944. James is honored at the Manila American Cemetery in Fort Bonifacio, Philippines. He received the Air Medal with 2 Oak Leaf Clusters, as well as the Purple Heart. James yearbook photo was printed next to Hero Fred Manship, a close friend. Both were Radio Operator/Gunners, and died on missions, but half a world apart.