Frank I. Keyser was born on March 4, 1920 and lived in Spring City, Pennsylvania. Frank was one of three children. Records are unclear, but it appears Frank became an orphan and lived at the Methodist Episcopal Orphanage in Philadelphia according to the 1930 Census.
Frank obtained employment at Pennhurst State School as a switchboard operator. Pennhurst was a state run school for the mentally and physically handicapped located just outside Spring City, established in 1908 closed in 1986. It could house up to 10,000 patients.

Frank enlisted in the Army on March 2, 1942. After training he was assigned to serve with the 27th Infantry Regiment, of the 25th Infantry Division. The 25th Infantry “Tropic Lighting” Division, is where Heroes John Toth, Frank Pinter and Joseph Marz served. 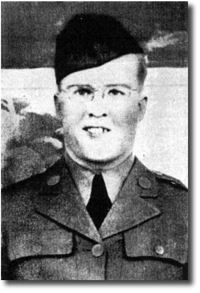 The 25th Division was shipped to Guadalcanal in January 1943 to relieve the 1st Marine Division. After the Japanese gave up and evacuated Guadalcanal in the summer of 1943, Frank’s division made plans to move up through the Solomon Islands capturing key islands in the chain, including Kolombangara, New Georgia. It was during these campaigns that Frank was wounded on September 15th. He was evacuated and returned to duty after recovering. The division mounted an amphibious assault on Vella Lavella in the northern Solomons on August 15th. Frank also saw service on New Herbrides. His division received a well deserved rest as well as replacement of equipment in New Zealand in February, 1944. Afterwards, they were sent to New Caledonia for additional training through the summer and late fall, preparing for the Liberation of Luzon, Philippines. The 25th Division landed on Luzon on January 11, 1945 in the San Fabian area. Private First Class Frank I. Keyser was Killed In action on February 2, 1945. He is buried at the Manila American Cemetery, Manila, Philippines.