Francis received basic training in Georgia and additional training in Florida, Tennessee and Indiana. He was shipped overseas to England in February 1944, then to France.

His parents received a letter dated July 29th that he was writing from a foxhole and had been slightly wounded. He received the Purple Heart for that wound sustainedon July 19th.

On October 1st, Francis’s parents received notification that he was seriously wounded in Fosse, Belgium. France had been finally liberated along with the Belgium border area including the crucial port of Antwerp (giving the Allies a major port on the European Continent for logistics).

Sergeant Francis J. Ianni was Killed In Action on September 12, 1944. Francis was buried at a local military cemetery. After the war, at the families request, his remains were returned for burial in his home country. The Funeral was held at his parent’s home on Saturday, April 2, 1949, followed by Solemn Requiem Mass celebrated at St. Mary’s church. Burial was at the churches cemetery. The firing squad and bugler were from the Valley Forge General Hospital. The Color guard was supplied by Allied Veteran’s organization.

His brother Joseph served in the Navy during the war. 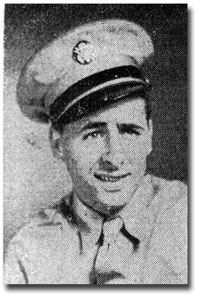