Eli moved to Downingtown, Pennsylvania, to live with his brother Robert. He was highly respected among friends and associates in Downingtown. Eli attended the Bethel AME church.

Eli volunteered for service and entered the Army on July 28, 1941. He received training at Sutton, North Carolina, Camp Pickett, Virginia, stationed in Louisville, Louisiana; and Indiantown Gap, Pennsylvania. He was sent overseas to the European Theater of Operations in 1944, where he served with the 386th Engineer Battalion, 111th Engineer Regiment. His unit served in Naples-Foggia, Anzio, Rome-Arno campaigns in Italy.

Corporal Eli Harden Jr. was killed in action on March 23, 1945 in Italy. He was buried at the Sicily-Rome American Cemetery in Nettuno, Italy. 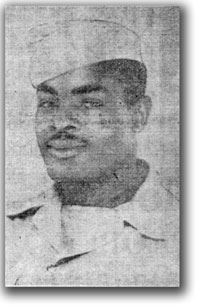