Sherwood (Sherry) Henry Hallman was born on October 29, 1913 to Harry and Emma Hallman who lived in Spring City, Pennsylvania. Sherwood was one of five children. Sherwood attended Spring City High school, Class of 1931, where he played football. Sherwood was a member of the Zion Evangelical Lutheran Church in Spring City. Sherwood left school in his 2nd year of high school, to help support his family during the great depression. He loved animals, especially horses. He obtained a job at the Spring City Race Track grooming horses. When the race season was over, Sherwood  worked at Stauffer's Market in Spring City.

In 1939 Sherwood began his own business – Sherry’s Modern Market – a grocery store on wheels. He bought a step truck, and had it customized. Sherry’s market offered door-to-door sales of groceries, produce, poultry, meat and dairy products. 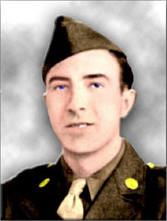 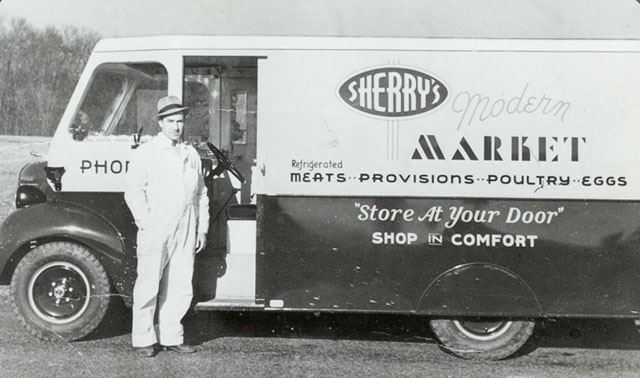 Sherwood’s father passed away in April 1941, and his Selective Service (draft) designation was changed to 3-A, since he was the sole supporter of his mother. (In 1942, his draft status was changed to 1-A). Sherry was known as a fine looking young man, however, his vibrant personality and winning smile overshadowed his handsomeness.  Many were attracted to Sherwood by his outgoing, charismatic personality, and generosity to a fault. On January 4, 1942, Sherwood married Virginia Dieter of Kimberton. Virginia was still in high school when they met in 1941. Due to overcrowding, the school administration split the students into morning and afternoon sessions. Virginia was assigned to the morning sessions. She obtained afternoon employment at A. C. Roberts Company, a meat packing facility in Kimberton, where she worked in the office. One day, Sherry came in for a rush order, and Virginia wrote up the bill.

Virginia’s mother’s friend, Laura Beitler, knowing she had met Sherwood, invited the unsuspecting Virginia for lunch on a Wednesday, the day that Sherwood stopped for her weekly delivery. When Sherwood arrived, she formally introduced him. (At that time, a formal introduction was an important prerequisite for dating.) Sherwood then asked Virginia out on a date,    Sherwood was drafted into the Army and entered service on January 8, 1943. He received training at Fort McClellan, Alabama, at their Infantry Replacement Training Center (IRTC). Virginia traveled to Fort McClellan to see Sherry, on his rare weekend passes. In World War II, the average age of combat troops was 18; anyone 20 or older was usually referred to as “Pops”. Sherry was 29 when he entered the service. Nevertheless, he kept up with the younger men, and earned their respect. The younger soldiers often sought his advice. Sherwood took one, Richard Lindsey from the south, under his wing. In May 1943, Sherwood was sent overseas to the European Theater. Initially he was stationed at Tidworth Castle, England, a replacement depot. Sherwood was then sent to Penrose Manor, Cornwall, in the southern part of England. He was assigned to serve with Company F, 2nd Battalion, 175th Infantry Regiment, 29th Division, a Maryland National Guard Unit; the same Division that Hero Robert Montgomery served. In England, Sherwood’s division trained intensively for a year. They were preparing for the landings in France and the liberation of Europe. Sherwood landed in Normandy on Omaha Beach on June 6th, 1944. Omaha Beach was the most costly in casualties of the five landing beaches; the horror is accurately depicted in the first few minutes of the film “Saving Private Ryan”.  Sherwood was wounded in action on June 7th,by friendly fire - strafing Allied aircraft. He was evacuated to a hospital in England for treatment, and returned to duty with his unit 2 and a half weeks later.

In September, his division was trying take Brest on the tip of the Brittany Peninsula south and east of Normandy. Brest was a key city, and housed a forward German U-Boat base, submarines that were devastating our supply ships.  A strong enemy position at Fort Keranroux, protecting the city, seemed impenetrable. Sherwood’s Battalion came under withering fire from several interlocking enemy positions on September 13th and their advance was halted. Sherwood instructed his men to give him covering fire, and then single handedly maneuvered to advance on the enemy despite the intense enemy fire. For his actions above and beyond the call of duty, Sherwood Hallman was awarded our Nation’s highest award, the Congressional Medal of Honor. His Medal of Honor Citation reads as follows:

“On 13 September 1944, in Brittany, France, the 2d Battalion in its attack on the fortified city of Brest was held up by a strongly defended enemy position which had prevented its advance despite repeated attacks extending over a 3-day period. Congressional Medal of Honor" 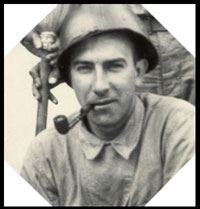 Finally, Company F advanced to within several hundred yards of the enemy position but was again halted by intense fire. Realizing that the position must be neutralized without delay, S/Sgt. Hallman ordered his squad to cover his movements with fire while he advanced alone to a point from which he could make the assault. Without hesitating, S/Sgt. Hallman leaped over a hedgerow into a sunken road, the central point of the German defenses, which was known to contain an enemy machinegun position and at least 30 enemy riflemen. Firing his carbine and hurling grenades, S/Sgt. Hallman, unassisted, killed or wounded four of the enemy, then ordered the remainder to surrender. Immediately, Twelve surrendered and the remainder of his company shortly secured the position. Seeing the surrender of this position, about 75 of the enemy in the vicinity surrendered, yielding a defensive organization, which the battalion with heavy supporting fires had been unable to take. This single heroic act on the part of S/Sgt. Hallman resulted in the immediate advance of the entire battalion for a distance of 2,000 yards to a position from which Fort Keranroux was captured later the same day. S/Sgt. Hallman's fighting determination and intrepidity in battle exemplify the highest tradition of the U.S. Armed Forces.” Although he normally carried a BAR (Browning Automatic Rifle - a heavy 30 caliber hand held machine gun), Sherwood exchanged it with one of his men for the lighter M1 Carbine, giving him the mobility he needed. He then charged the enemy position firing his carbine and throwing grenades.  When Sherwood broke through into their midst, his ammunition was expended. He decided to bluff and ordered their surrender pointing his empty carbine at them. Staff Sergeant Sherwood Henry Hallman was Killed In Action on September 14, 1944, by a German sniper in Brest France. He was awarded a second Purple Heart, as well as the Congressional Medal of Honor for his courage above and beyond the call of duty for his actions on September 13th. Staff Sergeant Sherwood Hallman was buried with full military honors at the American Brittany American Cemetery, St. James, France. This cemetery is sometimes called the forgotten cemetery, as the American Cemetery above Omaha Beach overshadows it, even though there are 4,410 Americans buried in the St. James Cemetery. 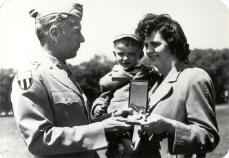 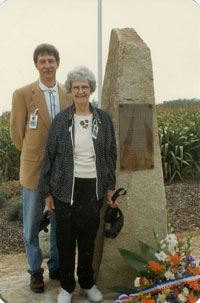 The Medal of Honor was presented to his wife and 2-year-old son, Sherwood Hallman II, during a ceremony at Fairmount Park Military Police headquarters in Philadelphia on May 31st 1945.  The presentation to the family was made by Brigadier General Malcolm F. Lindsey, Commanding General Indiantown gap Military Reservation. The Walter T. Caffrey American Legion Post 602 erected a memorial monument dedicated to Sergeant Hallman at the Spring City Borough Hall on November 18, 1967. In 1994 Virginia traveled to France with her son and was invited to the cemetery at St. James.  She was surprised by the number of people in attendance. She did not know that a local Frenchmen, Yannick Creac’h, led a community effort to create a memorial to Sherwood. In a ceremony with a French Navy Honor Guard, the memorial was unveiled.  Virginia Hallman and Sherwood Hallman II currently reside in Berks County.