Herbert J. Hagamon was born on November 16, 1917 to Conley and Delta Hagamon who lived in Foy, Grayson County, Virginia. The family later moved to Coatesville, Pennsylvania.

Herbert graduated from Scott High School in 1936, and then worked with Harry at Lukens Steel in Coatesville. Herbert became an accomplished machinist. Harry remembers a period of time where they were laid off from Lukens and obtained employment at a paper mill - Harry worked in the office and Herbert learned the craft of block printing.

Herbert was a one of a group of five close friends: Jim Latta, Harry Lackey, hero John Grycky, and hero Vernon Rubincam. Harry Lackey remembers meeting Herbert in grade school and becoming close friends. The five friends met nearly every Sunday to play touch football at the Latta’s Farm in Parkesburg. Herbert and Vernon got their pilot's license together in Coatesville and Harry remembers that Herbert gave him his first airplane ride, which Harry remembers as a real thrill. 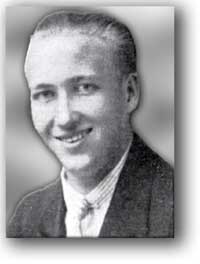 On December 7, 1942, Pearl Harbor, Herbert set aside his job and other responsibilities to help defend his country.  His friends felt the same. Harry Lackey had a vision problem which prevented him from enlisting but he served on the home front, making critical castings for the Manhattan Atomic Project while working at Luken's.  Herbert, Jim Latta, Vernon Rubincam and John Grycky joined the Armed Forces. The four called themselves the “Knights of the Square Table” because they were like knights going to defend their Country, and they were going to “Square” things up. The “Knights” made a pact, that if any survived, they would attend to the families of the fallen. Herbert enlisted in the Army Air Corps on August 16, 1942. He trained as a fighter pilot and earned the rank of Second Lieutenant. Herbert was sent overseas to fight in the European Theater in 1943, serving with the Eighth Air Force. During his two years overseas, he was promoted to First Lieutenant, and later to Captain. Herbert was stationed at Burtonwood, a maintenance and supply base for the Air Force that was located in Liverpool, England during WWII. Burtonwood had the largest airfield in Europe during the war. Herbert served in the 310 Ferry Squadron.

On June 10, 1945, Herbert was ferrying an A-20 Havoc Fighter Bomber from France to England in stormy weather with two other pilots. Herbert’s aircraft never arrived. The A-20 was a very fast light bomber.
On June 25, 1945, his mother received a telegram stating that Herbert was Missing In Action.  “Herbert…was a pilot of an A-20 (Havoc) bomber, and was returning to England under adverse weather conditions, flying alone, when he suddenly disappeared and no contact could be made with him by radio or otherwise.”  His mother made every effort to obtain more information about her son, contacting the War Department, the Red Cross, and other agencies, but she received no further information until a telegram came on December 8th declaring Herbert was Killed In Action. The telegram further stated “…unavoidable circumstances made necessary the unusual lapse of time in reporting your son’s death.”
His mother received a letter from a General Edwin F. Witsell, Acting Adjutant General of the Army: “I recognize the anxiety you have suffered since he was first reported missing and deeply regret the sorrow this later report brings to you. May the knowledge that he died in the service of his country be a source of sustaining comfort. My sympathy is with you in this time of great sorrow.”
A memorial service was held on January 27, 1946 for Captain Herbert Hagamon at the First Baptist Church in Coatesville. Lieutenant James Latta spoke in tribute to Herbert. The church's Service Flag was unveiled, revealing a Gold Star representing Herbert. The citation read:

“To the memory of Herbert Hagamon, our brother in Christ Jesus, a member of this church, who gave his life for those holy ideals for which America stands and which we cherish so deeply.”

Captain Herbert J. Hagamon is listed and honored on the Tablets of Missing or Buried at Sea at the Cambridge American Cemetery, in Cambridge, England. He was a holder of the Air Medal, and received the Purple Heart posthumously. During the 40th reunion of the class of 1936, an annual scholarship began to honor the four young men who died in World War II (John, Vernon, Herbert, and Harry Benard). The scholarship is given to a graduating Coatesville High School Senior for good citizenship.