Herbert C. Garnett was born on December 25, 1922, to Herbert and Mary Gordon Garnet of Philadelphia. His father was employed by the Pennsylvania Railroad. Herbert was raised from infancy by his Aunt and Uncle, Mr. and Mrs. Samuel Green who resided in West Chester, Pennsylvania. He was one of five children.

Herbert entered service in the US Army in 1941. He received Officers Training School at Fort Benning Georgia, and was shipped overseas to the European Theater in July, 1944.

In Grateful Memory of
Second Lieutenant Herbert Ganett, AS No. O-1302290,
Who Died in the service of His Country in the Mediterranean Area, January 2, 1945.
He Stands in the Unbroken Line of Patriots who have Dared to Die That Freedom Might Live, and Grow and Increase its Blessings.
Freedom Lives, and through it.  He Lives-
in a way that Humbles the Undertakings of most Men 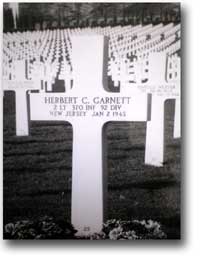 His aunt and uncle, who raised him as their own son, received the fateful telegram on Friday January 19th. A memorial service was held at the Community Union M. E. (Methodist Episcopal) Church in West Chester on February 25,1945. Herbert is buried at the Florence American Cemetery in Florence, Italy. Both of his brothers served: Kennett was stationed in Virginia at the time, and William was somewhere in the Pacific.