John L. Cuddy was born to Lola Hickey and John Cuddy on May 9, 1922. At the time, the family resided in Kennett Square, Pennsylvania. John graduated from Kennett high school. John was a terrific student, he was involved in many sports and numerous clubs. John married  his high school sweetheart, Kathryn Brackin, on Christmas Eve, 1941.

John went to basic training in Pine Camp, New York. Later he went to Fort Knox, Kentucky, Bowie Texas, and a desert in California for more training. John’s rank was a Technical Corporal, or Tec/5.

John was wounded in France while in the Normandy Campaign. He was originally a tank driver, but after he was shot in the shoulder in France he was re-assigned as a rifleman.

John was wounded again in Belgium. The last and final battle John fought in was the Battle of the Bulge.

John L. Cuddy died on January 15, 1945 at age 26. The memorial service was held in St. Patrick’s Church and burial at the church cemetary. The funeral was closed with a three-gun salute and the playing of taps.

John’s family received many of John's awards and metals for his bravery, including the Purple Heart. 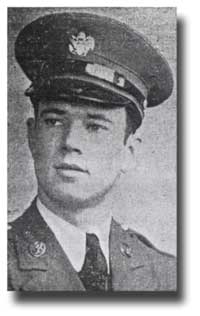