George Maurice Cook was born on June 11, 1914 to Maurice and Minnie Cook of Spring City, Pennsylvania. George had one sister.

After graduatting from Spring City high school, he attended Pierce Business College in Philadelphia and later worked at the Elliott-Underwood Company, one of the leading manufacturers of typewriters.

George joined the Pennsylvania Nation Guard in November 1940, serving with the Company B, 111th Infantry. George’s regiment was sent to Camp Pendleton, VA and  Camp Stoneman, CA for training. They were then shipped off to the Pacific Theater of Operations in November, 1943.

George’s regiment participated in the amphibious assault against the Japanese held Kwajalien on D-Day January 31, 1944. Kawajalien is the worlds largest atoll, comprising a string of one hundred islands forming an irregular shaped lagoon 66 miles long and 20 miles wide. 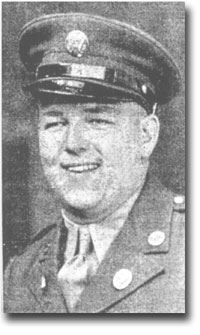 George came down with a life-threatening illness while in Japan and was flown Fort Dix, New Jersey in an attempt to save his life. He arrived by aircraft on November 30, 1944. and died at Fort Dix on December 7, 1944. He was buried at the Mount Zion Cemetery in Pottstown.