Elwin McDowell Blackstone was born on June 20, 1917 to Alva and Gladys Blackstone who lived in Philadelphia. Elwin was the youngest of two sons. His father was a professor of business at Drexel University.

The family moved to Wayne, PA in the 1930’s, where Elwin graduated from Radnor High school in 1939.

Elwin marred Mary Louise Glover in Petersburg, Virginia, on March 6, 1943. Less  than a month after his marriage, Elwin set sail for Reykjavik Iceland on April 4, 1943, sailing for England aboard the USS Gemini. 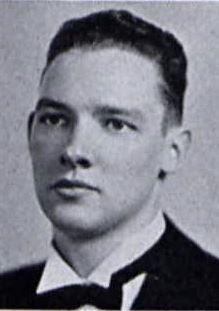 The 317th entered combat after D-Day (June 6, 1944) coming ashore at Normandy in August, 1944. The 317th participated in the breakout in Normandy, the light strike across France until Patton’s Army was halted at the Rhine River when supplies were pulled. Later, the 317th was involved with Patton’s daring rescue of the entrapped troops at Bastogne. First Lieutenant Elwin McDowell Blackstone was killed In action on January 25, 1945 at Pintsch, Canton de Wiltz, Diekirch, Luxembourg.  Elwin is buried at the Washington Memorial Chapel at Valley Forge.