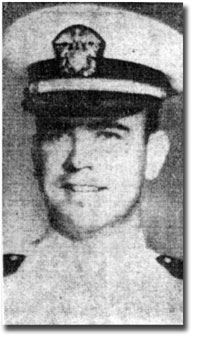 James Antony Kelly was born on January 3, 1941. He was the son of Dr. James A. Kelly Sr. and Margaret (Shine) Kelly who lived in Phoenixville, Pennsylvania. He was one of four children. James, who liked to be called Tony, attended St. Ann’s parochial school and later became a member of the Church.

He graduated from Malvern Prep in 1958 and participated in many sports at the school (swimming, JV football, track and baseball). He was remembered in his class of 1958 yearbook (pictured at right) as the comedian and liked to spend many summers at Ocean City. While growing up James worked as a fountain tech at the Gateway Drug Store. 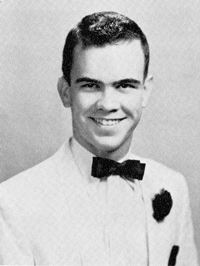 Lieutenant (j.g) Kelly was commissioned as a Line Officer after completing Naval Officer Candidate School at Newport Rhode, Island, in June, 1964. After spending the holidays with his parents, he went to San Francisco, CA. His new orders stationed him in Okinawa with the U.S. Naval Security Group.

In January 1966 he was assigned to serve aboard the aircraft carrier U.S.S. Oriskany.

On October 26, 1966, Lt. (j.g.) James Antony Kelly was one of forty-four men who died of suffocation in a fire aboard USS Oriskany. The ship was in the bay of Tonkin during this tragedy. The fire and subsequent explosion blocked the exits from the Officers Quarters preventing their escape from the smoke and fumes. The Naval History Center, Dictionary of American Fighting Ships (DANFS) describes the tragedy thus:

The carrier was on station the morning of 26 October 1966 when a fire erupted on the starboard side of the ship's forward hanger bay and raced through five decks, claiming the lives of 44 men. Many who lost their lives were veteran combat pilots who had flown raids over Vietnam a few hours earlier. Oriskany had been put in danger when a magnesium parachute flare exploded in the forward flare locker of Hanger Bay 1, beneath the carrier's flight deck. Her crewmen performed fantastic feats in jettisoning heavy bombs which lay within reach of the flames. Other men wheeled planes out of danger, rescued pilots, and helped quell the blaze through three hours of prompt and daring actions. Medical assistance was rushed to the carrier from sister aircraft carriers Constellation (CVA-64) and Franklin D. Roosevelt (CVA-42).

Funeral services were held at the Kepp Funeral Home in Phoenixville, on November 5th. Solemn Requiem Mass was celebrated at St. Ann’s, followed by burial at St. Ann’s Cemetery.

Malvern Prep has a small War memorial on its campus that honors the men who served and died for their country.