Dwight Dawson Johnson was born on January 18, 1948 in Harnett County, North Carolina. The family moved to Baltimore in 1953, then to Denver, Colorado in 1960. They returned east to Glen Mills, Pennsylvania in 1964

Dwight developed his talent as an artist in media such as pastels, charcoal and oils. He was published in school publications, and sold a number of his works. While attending Glens Mills school, he lettered in football although he was considered a ‘super-lightweight.

Dwight entered the Marine Corps in 1967 after graduating from Henderson High School. He was trained to operate 60 mm mortars. Dwight was sent to Vietnam and served with Mike Company, 3rd Battalion, 9th Marines, 3rd Marine Division in Quang Tri Provice, South Vietnam, near the Laotian border.

Lance Corporal Dwight Johnson died in action on May 4, 1968. 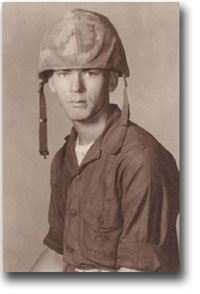 Bruce Swander, a Vietnam Researcher contributes the following on Johnson: “Quang Tri Province is the northernmost area of South Vietnam that hugged the border to the North, resulting in some of the hardest fighting during the war. It was here that the North Vietnamese would infiltrate their best highly-trained soldiers into the South with some of the best Chinese weapons of the time. By May 1968 LCpl Johnson would have seen the real carnage of war. The Marines of 3/9 had survived the onslaught of the infamous TET offensive in January, and efforts were underway to clear the border area of any remaining enemy elements. Operation KENTUCKY was launched across the demilitarized zone – one that would inflict heavy casualties on both sides. As the sun rose on 04 May, the Marines of 3/9 rained a barrage of artillery and mortars onto the hamlet of Thon Can Vu – a known enemy encampment. Mike Company was sent in to clear out anyone left, but met with little resistance. Bulldozers were brought in to destroy any buildings left as the squads searched for hidden caches of ammunition, tunnels, or enemy wounded that could be captured. At 4:30PM the lead group of the Company moved out for a 2-hour march to their night position – when the NVA countered with their own mortar and artillery attack on the Marines. Within minutes, 11 men would be seriously wounded – and LCpl Dwight Johnson would be killed by a similar weapon of destruction that he had been utilizing against the enemy. As darkness set, both sides dug in for their next encounter. A total of 59 Americans would lose their life on this single day as the war raged on.” A memorial service was held at Mill Creek Christian Church, Newton Grove, North Carolina on Sunday May 19th where he was buried with military honors. His close friend Robert J. Brown provided military escort. Dwight and Robert were high school friends and joined the Marines together. Robert was then stationed in San Diego.