Walter Joseph Jankowski was born on August 22, 1944, to Marjan and Emily Malec Jankowski. He was one of four siblings.

Walter graduated from Downingtown Senior High School in 1963. He took an active interest in sports, and was a member of the football and track teams. Walter was president of the Future Farmers organization while a student and won numerous awards in his agricultural pursuits. Prior to entering the Marines, he operated a landscaping gardening business. Walter was a member of the St. Mary of Providence RC Church, Elverson.

Walter entered the Marines on August 31, 1963. He completed recruit training at the Marine Corps Recruit Depot, Parris Island, South Carolina. He then reported to Camp Lejeune, North Carolina, for combat infantry training as part of the 3rd Shore Party Battalion, 3rd Marine Division. With a grade of E4, he was a skilled radio operator and served in the Mediterranean before being sent to Vietnam in March of 1966. Walter was scheduled to return home in January 1967 where he planned to make wedding arrangements with his fiancée, Miss Patricia Massimini, of 415 Jackson Ave., Downingtown. His enlistment would have terminated in August 1967. 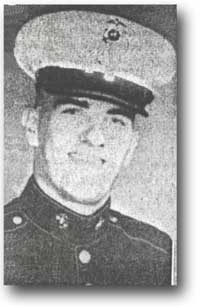 Corporal Jankowski was killed by enemy rifle fire while on guard patrol in Da Nang, Vietnam, on October 31, 1966. His family received a letter postmarked four days prior to his death, in which the young serviceman wrote, "If you don't hear from me don't be alarmed. When I go out, I just hope for the best. That's all you can do around here." Services were held at the Ralph W. Ralston Funeral Home in Downingtown. The interment was at the St. Ann’s RC Cemetery in Phoenixville with an honor guard of and a rifle salute by a special detachment of the Marines.