Thomas Joseph Vontor was born on November 2, 1944 to Stephen and Elizabeth (Casmay) Vontor who lived in Phoenixville , Pennsylvania.

Thomas then attended Phoenixville High School where he played on the golf team. After school, Thomas obtained employment with the Ajax Knitting Mill in Royersford. He was also a volunteer fireman with Phoenixville Hose, Hook and Ladder Company No 1.

Thomas was drafted in August 1965 and entered service in the Army. He received basic training at Fort Jackson, SC. Thomas volunteered for airborne training, but was eventually assigned to the “Big Red One” First Infantry Division where he became a machine gunner. He was shipped overseas to Vietnam in February, 1966, and soon entered combat.

Private First Class Thomas Joseph Vontor was Killed In Action on July 9, 1966 in Vietnam. The family was notified on July 10th by a personal visit to their home by Lt. Col. John M. McFarland and Chaplain Major John J. Sullivan from Valley Forge General Hospital. The next morning, Thomas’ family received the official telegram from the Major General J. C. Lamber, Adjutant General: 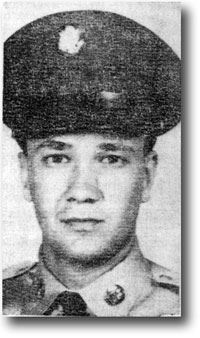 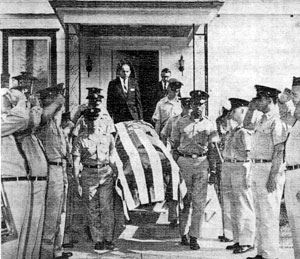 The Secretary of the Army has asked me to express his deep regret that your son, Private First Class Thomas J. Vontor, died in Viet Nam on July 9 as a result of gunshot wounds received while on a combat operations against a hostile force.

Please accept my deepest sympathy. This confirms personal notification made by a representative of the Secretary of the Army.

Thomas was returned home under military escort commanded by Staff Sergeant William J. Greenan. Funeral services (pictured at right) were held July 15th. Flags draped the borough as the town showed its respect for its fallen citizen. Melvin Hindle, Commander, Walter Back and Richard Thomson, past Commanders the Ettinger-Powers-Campbell Post local VFW Post 1584, and William Eagle Past Commander of the Samuel A. Whitaker Post 482 American Legion represented the Veterans. Mayor Joseph E. Dougherty represented the borough, and Assistant Postmaster Edward D. Krayaak represented the non military branch of the government. The military escort was joined by a volunteer group of eight Phoenixville policeman who accompanied Thomas’s remains to St. Ann’s where a Solemn Requiem Mass was celebrated. The mass was followed by burial with full military honors and St. Ann’s cemetery.

Thomas was the first Combat Casualty from Phoenixville from the Vietnam War.  Remembrances

2002 Thirty six years have passed by us now and words are hard to find anymore...for they all seem to have been said. It's now the 20th year of this black Wall that we talk to as a brother...this Wall that draws us always back...to feel and remember and cry and heal...it's a sight to behold my brothers and one thing is certain...your sacrifice was truly not in vain...and never forgotten...forever my brother and friend. 2003 And so another year has passed us by
still these tears fill my eyes
and some demons still reside within
with the pain of losing such dear friends