James P. McMahon was born on September 13, 1931 in Phoenixville, Pennsylvania. His father was a World War I veteran. James was one of 11 children.

James attended Phoenixville High School but left in September, 1950 to enlist in the Army. He received basic training at Fort Knox, Kentucky. James was assigned to serve with the 9th Infantry Regiment of the 2nd Infantry Division. His division was moved to Fort Lewis, Washington, and shipped to Korea in August, 1950.

North Korea invaded South Korea in June driving deep into South Korea. US forces rushed to help, but fought a steady retreat to a small corner of Korea called the Pusan Perimeter. The North Koreans could not take the allied position at Pusan, despite ferocious attacks.

In September, General Douglas MacArthur stages a daring amphibious attack behind enemy lines at Incheon, cutting off the enemy’s supply lines. During one of these actions that James was wounded, but recovered and returned to duty. 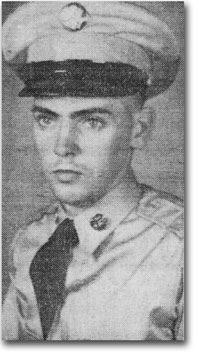 In October, allied forces moved north out of the Pusan area, reaching the 38th parallel which divides North and South Korea. They continued chasing the enemy into North Korea rapidly advancing. On October 19th, over 18 divisions of the Chinese Army crossed into North Korea to aid the North hiding by day and moving my night. On November 1st, the Chinese made contact with the American forces, a total surprise attack. The Allied forces were overwhelmed and thus began the longest retreat in US military history. The Allied forces were later able to stop the combined Chinese and North Korean Army and push them back. Private First Class James P. McMahon was killed in action on November 18, 1950 in Korea. He is buried at Arlington National Cemetery. His brothers John and Charles Jr. served during World War II. His youngest brother also served in the Navy as a Machinist Mate 1st Class on the destroyer USS Stribling DD-867 and saw duty in Vietnam. 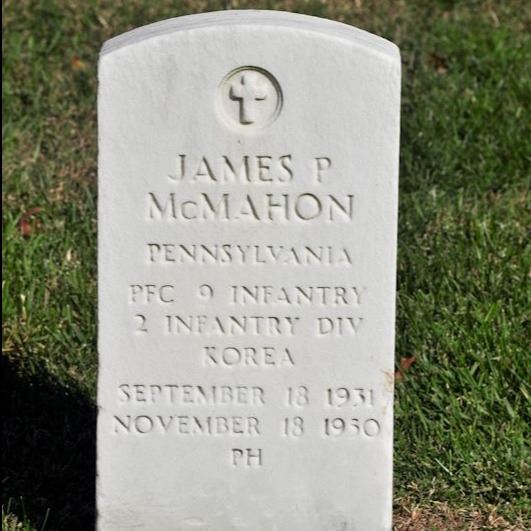