John enlisted in the Army after the Korean War began on July 19, 1950. After basic training he was assigned to the 3rd Armored Cavalry at Fort Knox, Kentucky. John was then sent to Korea in May and attached to M Company, 2nd Battalion, 24th Infantry Regiment, 25th Infantry Division.

Private First Class John Daniels Jr. was Killed In Action on June 2, 1951 in North Korea. His parents received the telegram on June 20th. Funeral services were conducted on March 11th. A military funeral was conducted by the Carter-Miller-Johnson post of the VFW at Worral Funeral Home. The Reverend G. H. Gover of West Grove officiated with members of the Second Baptist Church of Kennett Square. Interment was at the Longwood Cemetery. 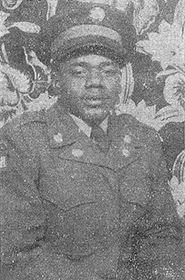