Harvey N. Collins, Jr. was born on January 17, 1917 to Harvey and Esther Collins who lived in East Fallowfield Township, Pennsyvania. The family later moved to Modena. Harvey was the sixth of nine children.

Harvey enlisted in the Army, specifically the Calvary, in 1935. He became a member of a “Rough Riders” group which put on exhibitions. He was stationed at Fort Myer, Virginia, where he married his wife, Elizabeth.

During WW II he survived a large shell explosion in Junction City, Kansas which broke one of his eardrums. He also survived three bouts of malaria.

After the War, Harvey was stationed in Japan and planned to send for his family but the outbreak of the Korean War changed his plans. Harvey was deployed to Korea in mid 1950.

When he returned stateside in May, 1951, he was stationed in El Paso, Texas, and moved his family there. His parents and siblings heard from him during Christmas 1952, but did not know he had been deployed to Korea again. 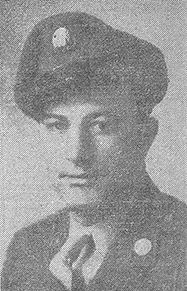 Harvey was sent to Korea with K Company, 3rd Battalion, 14th Infantry Regiment, 25th Infantry Division. Corporal Harvey Newton Collins Jr. was Killed In Action on June 20, 1953 in Korea. A Defense Department telegram was delivered to his brother, Luther’s house, but it was addressed to Harvey’s wife Elizabeth, so Luther could not open it but was able to guess it was bad news. They received confirmation of their assumptions from Elizabeth by air mail.   Harvey was buried at the San Francisco National Cemetery on September 28, 1953. Besides his wife Elizabeth, he was survived by his children - John, Patricia, and Robert who were teenagers at the time of his death. His brother James also served during the Korean War. His father was killed in a tragic train accident in 1954 when he was struck by an express train while crossing the tracks at the Coatesville train station. 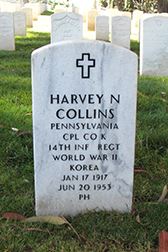