History of the Hall of Heroes

The concept of a “Hall of Heroes” in Chester County began in 1996. After attending a Veteran's Day ceremony in the Chester County Historic Courthouse, Tony Polito, a member of the West Chester Men's Service Club (WCMSC), noticed that although there was a memorial plaque with the names of those who gave their lives in World War I, there was none honoring those from World War II, Korea, or Vietnam. Tony discussed the idea of a full “Hall of Heroes” with local veterans and then presented it to the West Chester Men's Service Club.

Following approval from the WCMSC, Tony contacted Rodney Loper, Director of Chester County Veterans Affairs. Together they met with then Chester County Commissioner Chairman Karen L. Martynick, who expressed her support for the Hall of Heroes project. 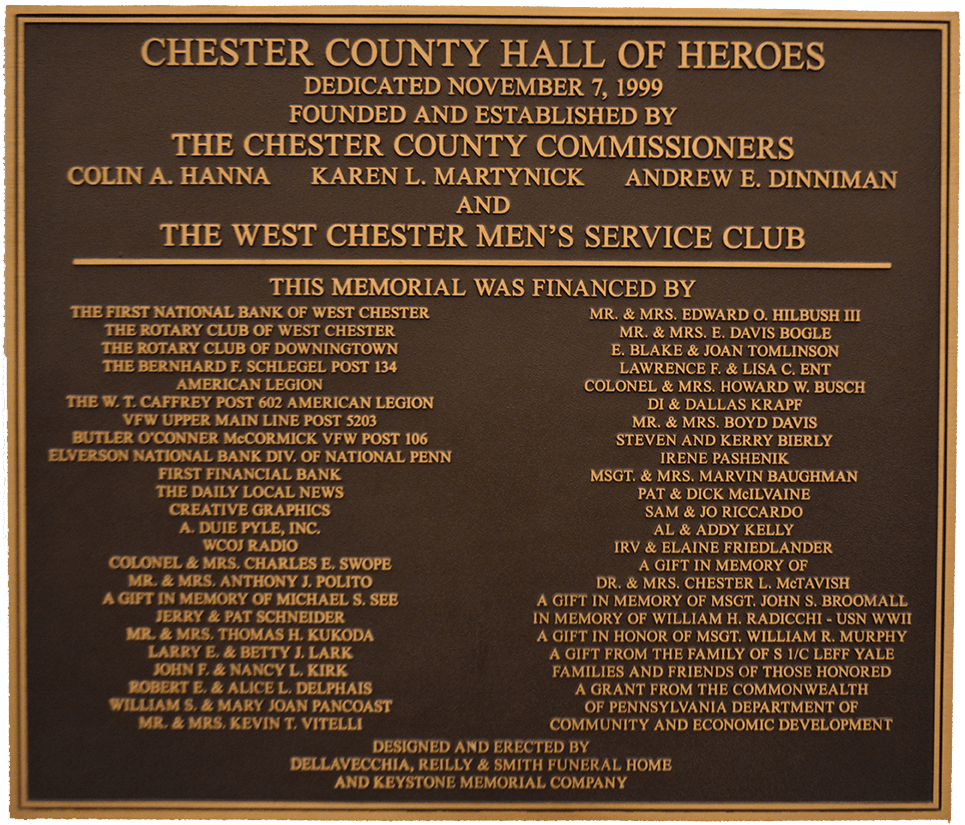 The process of gathering names of local heroes began. WCMSC member Larry Lark conducted internet searches, and local radio station WCOJ and the local newspaper, the Daily Local News, supported the effort by advertising the project and the list of names. A list was compiled of more than 575 names to be commemorated on the plaque. Prices for the design of a wall plaque were researched, discussed and finalized.

Michael Schneider of the design firm Creative Graphics donated the name "Hall of Heroes" and the logo design and graphics for fundraising.

The County Commissioners at that time, Karen Martynick, Colin Hanna and Andrew Dinniman, voted to support the project in July 1998, and the fundraising began. State Representative Elinor Taylor obtained a grant from the Pennsylvania Department of Community and Economic Development. A number of organizations, local businesses, and individuals also contributed. The total cost of the plaque was estimated at $50,000.

On Veteran's Day 1999, an emotional and poignant dedication ceremony for the Chester County Hall of Heroes, chaired by Col. Howard Busch and Chester Whiting, was held at the Historic Courthouse. A number of dignitaries participated, along with many Chester Countians, including a number of the heroes’ families. The Honorable Pennsylvania Supreme Court Justice Ronald D. Castille and the Honorable U.S. Congressman Joseph R. Pitts were keynote speakers. Three speakers were chosen to represent the families of fallen heroes in each of the wars: Mrs. Dorothy Detwiler, Gold Star Mother of Lawrence R. Detwiler a casualty of Vietnam; Mrs. Elizabeth Ring, sister of John Strickland, a casualty of the Korean War; and Mrs. Mary Horshock, a Gold Star Mother of John Horshock, a casualty of World War II. 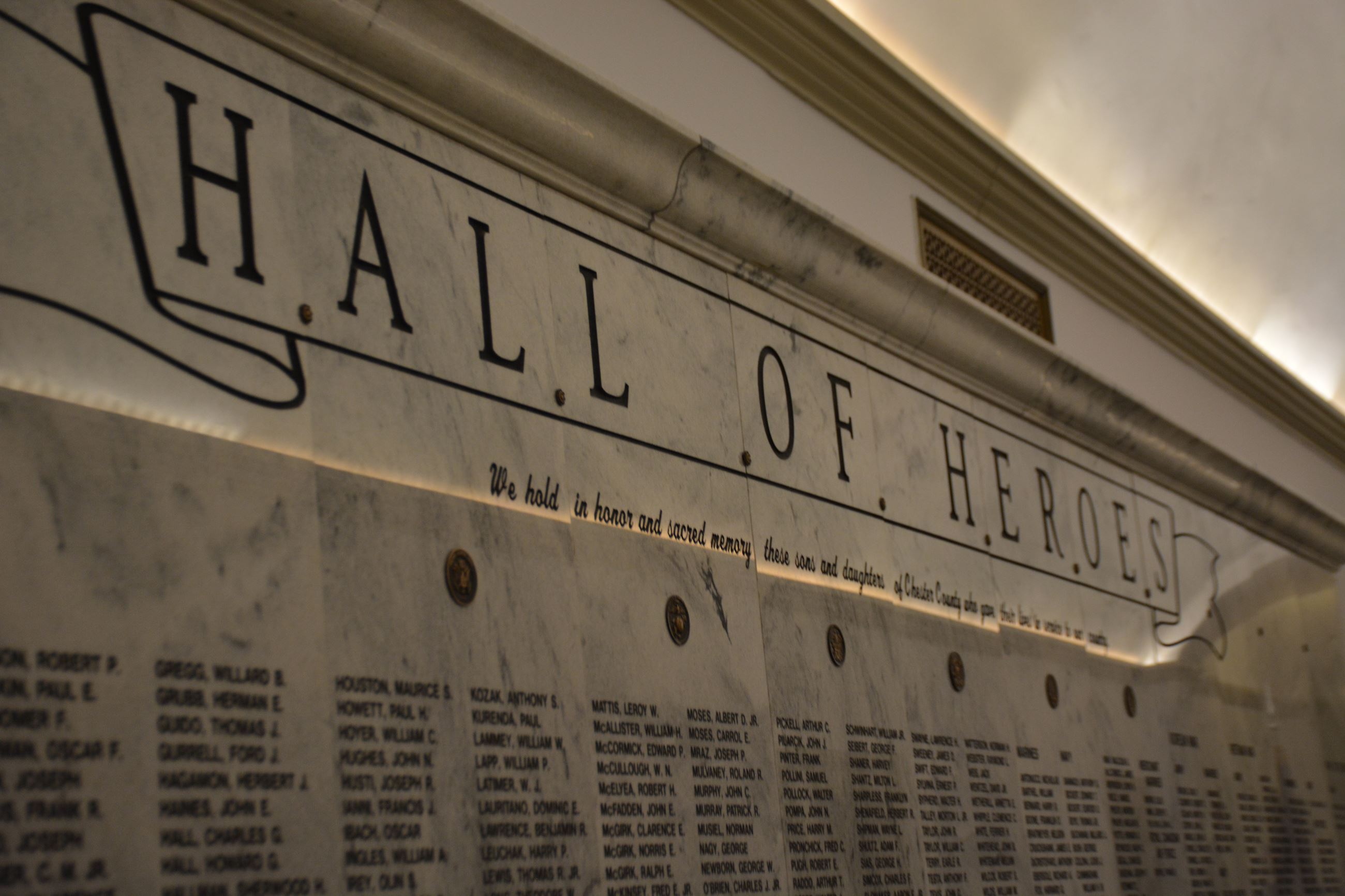 In June 2000, the WCMSC formed the Hall of Heroes Education Committee, which included club members, County Commissioner Andy Dinniman and several county educators and historians. The committee’s goal was to connect local students to the Hall of Heroes.  In the following months many ideas were explored and the conclusion was to create a website that could be used for researching and writing stories about Chester County heroes who sacrificed their lives to preserve our freedom.

In November of 2002, the WCMSC introduced the Hall of Heroes website project to local high schools. Teachers from each high school, as well as local veterans, were invited to a dinner presentation at the West Chester Country Club where County Commissioner Andy Dinniman and West Chester Mayor Dick Yoder addressed the guests. A presentation was given on the new Hall of Heroes website where several of the heroes’ stories were highlighted and the heroes’ relatives in attendance were introduced. Information packs were distributed to teachers who attended. The folders included a sample hero’s story, suggested research procedures and guidelines, and a list of heroes who were from each respective school district.

In 2003, 22 students from Avon Grove High School, under the leadership of teacher Eric Schott, submitted stories on 16 heroes from the Avon Grove area.

In April, 2007, one third of our heroes had stories and photos displayed on the website.

In 2014, a new panel was added to the Hall of Heroes memorial in the Historic Courthouse for the War on Terror.  It included the names of seven heroes from that era, engraved on the plaque.

In early 2016, the Chester County Veteran’s Affairs Administration funded a redesign of the original Hall of Heroes website. Almost 400 stories are now completed on the site. New details have been added along with photos and a section on veteran’s resources. .

The Hall of Heroes website is an ongoing project, with new stories added on a regular basis. We are also searching for information on our heroes who do not have a completed story, or more information on those who have an existing page.  If you have information on any of our heroes and would like to contribute it to our site, please click here.